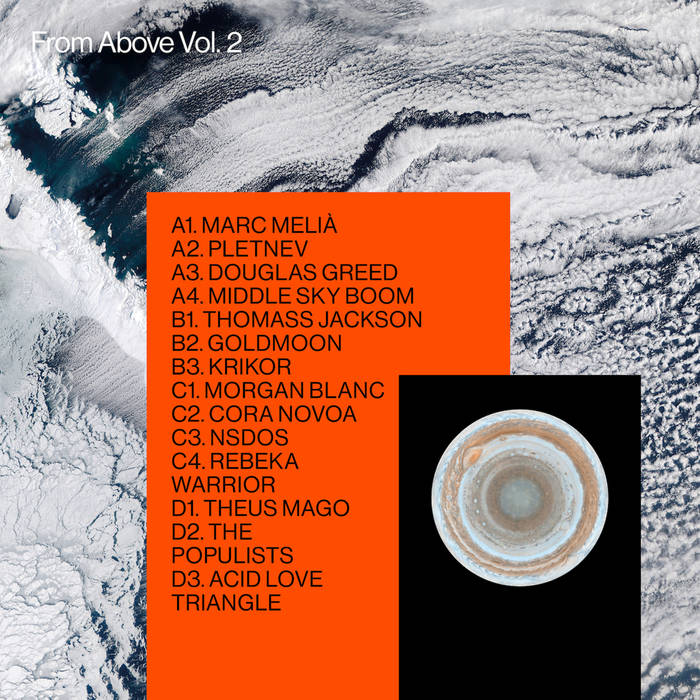 Back in 2018, Lumière Noire celebrated its first anniversary with a compilation featuring thirteen exclusive tracks by an eclectic group of electronic musicians – a family portrait of sorts. A few months later, a second volume of From Above, compiled by the label’s founder Chloé, once more brings fourteen established acts together with promising upstarts.

The first compilation was the embodiment of the label policy advocating for both artistic excellence and a widening of electronic aesthetics – bopping from deviant house music to adventurous IDM and to the rigor of dancefloor techno, among other electronic explorations.

Some of the artists featured are now closely associated with Lumière Noire, while others were more established performers such as Benedikt Frey, Lauer, Jonathan Fitoussi, Il Est Vilaine, Dave e Brun (half of Swayzac) and Frank Agrario, as well as upcoming artists such as C O N T R A (a side project by none other than Iñigo Vontier), Sutja Gutierrez, Théo Muller, Markus Gibb, Bajram Bili, and a sprinkling of UFOs circling the genre (Suuns’ Ben Shemie, Drvg Cvltvre, and electroacoustic combo Lumi).

This group photo laid down a number of paths for a label in perpetual evolution. Since then, the Parisian entity has continued to grow within the international electronic scene, releasing Local Suicide’s Leopard Gum EP, Iñigo Vontier’s first LP, and planning another slew of releases for 2020.

The lineup for this second volume of From Above is once again equally intriguing, offering a crescendo-like track listing over a double LP format, which is a feat of sorts for a «Various Artists» compilation.

The idea is to take the time to work on a 12” the way we would on a full album, to be a vector between the artists so that they can collaborate together and remix each other’s work, to come up with a visual identity.

Bandcamp Daily  your guide to the world of Bandcamp

Featuring Gary Bartz, 5 years of Rhythm Section Intl and an LP of the week by Nicolas Jaar